Solidarity with our Fellow Workers in the Twin Cities!

On Saturday, April 6th, passers-by will be treated to the sight of a large picket outside of Minnesota’s highest volume liquor store, Chicago-Lake liquors. Picketers will hold signs and chant slogans of support for the workers of the store, five of whom were fired after asking for higher wages as a part of a union drive with the Industrial Workers of the World.

Although workers had been discussing forming a union and acting for better conditions in their workplace for almost a year, the event will mark the first time any of them publicly declare their IWW affiliation. This declaration and action comes on the heels of the firing of five union employees–Hallie Wallace, Arella Vargas, Max Specktor, Davis Ritsema, and Joe Giwoyna–shortly after they presented a petition signed by the majority of the shop’s workforce asking for a dollar raise and elevating its $10.50 pay cap to $13 an hour. In January, the workers also turned in a petition asking for holiday pay.

“If there’s anywhere that needs a union, it’s a store like Chi-Lake,” said Wallace, “Despite the immense amount of money that we bring in, our wages are incredibly low. We have no paid sick days or holiday pay, scheduling is inconsistent, and we put up with unsafe working conditions and sexual harassment on a daily basis. We’ve come together to demand respect and dignity on the job for everyone working at Chi-Lake, and they’ve responded with nothing more than aggressive union-busting.”

At the picket, the workers and supporters will make clear their demands, which are to rehire those fired illegally, provide raises to all employees as initially asked, and that management stop union-busting.

In addition to the picket action on Saturday, the five fired workers also filed Unfair Labor Practices with the National Labor Relations Board.

“We will keep fighting until they rehire all five of the fired workers and give us all the raises we deserve,” said Specktor, “We’re not going to allow ourselves to be bullied by management. We’re going to win this fight.”

The campaign at Chicago Lake Liquors represents a new step for Food and Retail Workers United, an organizing committee of the Industrial Workers of the World labor union. Gaining prominence in recent years for organizing Starbucks and Jimmy Johns workers, the IWW is a global union founded over a century ago for all working people.

After four weeks of informational picketing, everyday for 2 hours outside of Janus Youth Programs’ main office at 707 NE Couch St, workers at the Streetlight/Porchlight shelters and at Harry’s Mother finally gained the right to keep their peer review panel. Both Streetlight/Porchlight and Harry’s Mother are non-profit programs serving youth, and both shops are under contract with the Portland Industrial Workers of the World. Janus told workers at both work sites that they would not sign their labor contracts with the peer review panels that they have had for over 10 years — instead trying to pressure workers into accepting binding arbitration at a cost workers and the IWW could not afford.

After four weeks of picketing, workers took a break for week five, a week that a contract negotiations session with management was scheduled. Management tried to get workers to accept a ridiculously long contract of 8 years, with wage re-openers every two years, in exchange for the keeping the peer review panel. Workers instead said they were only willing to go as long as a 6 year contract, with wage re-openers every 2 years and one additional, non-wages article which could be bargained during the wage re-opener.

Janus negotiators were not willing to budge.

At this point, workers suggested that the offer they were making was more than reasonable, and that there were people willing to get back out on the picket line if Janus would not compromise.

Janus’s negotiators took a caucus, and after a long break, returned to the table and agreed to the workers’ terms.

This is a huge victory for workers who have struggled many weeks for the right to keep their peers in a place to oversee any disputed firings — the peer review panel can overrule any firing decisions that Janus makes against its union workers. Janus workers and the IWW would like to thank the members of the community who have supported them in this effort, including Portland’s Jobs with Justice. A victory for one is a victory for all.

We’ll be out there again, in front of Janus Youth Programs, to protest Janus’s union busting tactics. They are taking away a time-honored peer review panel which allows for democratic oversight of fired workers. This panel has never cost Janus any money, and has been in place for 10 years, and now they are telling workers at two IWW-represented shops that they won’t sign their labor contracts with these panels in place.

What you can do:

We’ll be changing our schedule a bit this coming week:

If you’re new to the picket, try to show up half an hour early at Grendel’s Coffee, on the corner of 8th & E Burnside. The picket itself takes place around the corner at NE 7th & NE Couch St.

So, what’s happening at Janus?
The IWW has represented workers at Janus for 10 years, and the workers are currently fighting for a new contract. These negotiations have been going on for a year and a half now, with very little progress until recently. The workers are asking for a modest raise and very little else. However, Executive Director Dennis Morrow refuses to give any raise unless the workers agree to get rid of the Peer Review Panel which they’ve had since their first contract a decade ago. The Panel is the last step in a lengthy review process that workers have at their disposal if they are wrongfully fired. Janus wants to replace that Panel — a democratic body made up of 3 workers and 2 administrators — with mandatory arbitration, which will cost up to $1500/day, essentially in an effort to break the Union financially. And that arbitration isn’t binding, so even if the mediator finds that the worker was wrongfully fired, Janus won’t have to rehire them.

Two weeks ago, the Janus workers organized a picket outside the administrative offices, and we’ve been going strong there every day since. After all the stagnation in negotiations, Janus has finally started to budge since we’ve been outside making noise, and is moving closer to meeting our basic demands. We feel like this battle is close to being won, and so we’ve decided to keep up the pressure on Janus this week, February 22nd – 25th.

If you know you can make it any particular day or days, send us an email so we can keep track of our expected numbers. If you can’t schedule ahead of time, no big deal. Just come out and shout. We’ve got songs. We’ve got signs. We’ve got solidarity forever!

Another week of picketing is before us — we’ll be out there Monday through Friday mornings once again! Pre-picket meeting at 8:30am at Grendel’s Coffee at 8th and E Burnside, and picketing from 9am to 11am in front of Janus’s main office at 707 NE Couch.

Over 15 Janus workers and IWW members lined the sidewalks in front of Janus Youth Programs today with these demands. Morale was high and there was plenty of chanting and even some singing today as workers participated in direct action to pressure Janus into respecting their workers and giving them what they deserve.

What can you do to help?
Come join us on the picket line! We will be there every business day from 9am to 11am until demands are met. Or make a phone call to (503) 233-6090 and ask for the executive director, Dennis Morrow. When you call, let them know you calling in support of the union workers at Janus Youth. The workers deserve both the peer review panel and a decent wage. Janus must not deny the democratic oversight provided by the peer review panel and replace it with a process that could cost workers and the program thousands of dollars. As a non-profit, Janus should use your money to help youth, not fight workers. If you’d like to get in touch with the workers, write to them at:
shelterwobblies[at]gmail[dot]com
harrysmotherwobs[at]gmail[dot]com 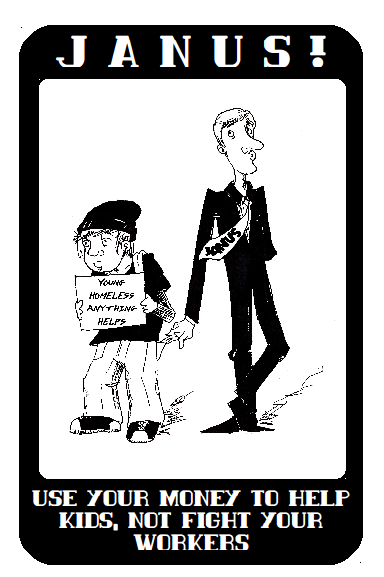 Employees at Harry’s Mother & Streetlight/Porchlight, nonprofit youth shelters run by Janus Youth Programs, are holding a demonstration to protect their rights. Employees, along with members of the Portland branch of the Industrial Workers of the World (IWW), the union representing these two programs will be holding an informational picket outside of Janus Youth Programs’ administrative offices, at 707 NE Couch, starting Monday, February 7th, from 9 to 11am. The picket will continue each business day until demands are met.

“We’re requesting that Janus focus their budget on improving services for youth rather than using those resources to fight their workers,” states Ciara Doyle, a member of the bargaining team. For the past 10 years, employees have had a contract with Janus Youth Programs providing them a peer review panel. This panel consists of 2 supervisors and 3 employees who democratically review contested employee firings. Janus is attempting to replace the peer review panel with mandatory arbitration. This outside arbitration process could easily cost Janus and its employees $1500 per session while the current panel costs virtually nothing. Without the financial resources, employees cannot participate as equals in an arbitration process.

Janus is withholding a wage raise until its workers agree to mandatory arbitration. “Janus is forcing its workers to choose between a fair contract and a living wage — we deserve both,” says Laura Taylor, an employee at Harry’s Mother.

The Industrial Workers of the World (IWW) is a volunteer-run union open to all workers. The Portland branch of the IWW represents workers at three local non-profit programs.